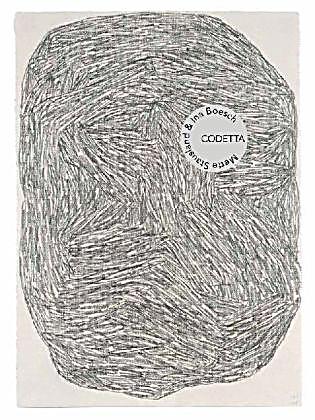 In 2006 Norwegian artist Mette Stausland began creating a series of drawings entitled «Coda». This is no coincidence. Coda in music signifies the closing part that picks up a piece’s core motifs again. Accordingly, the «Coda» series exemplifies Stausland's work as a graphic artist, representing a condensed version, so to speak, of what she expresses through her drawings.
«Codetta» – the diminutive of coda – is the title of this publication, which presents a selection of drawings from the «Coda» series. Accompanying the pictures are texts by Ina Boesch – poetic apercus or fictionalised episodes from the life and work of Mette Stausland based on in-depth conversations with the artist. Drawings and texts (German and English) interact in a subtle way, while each stand alone, too, as pieces of art in their own right. The sparse and clear language of both the visual artist and the writer is finely brought to the fore in the congenial book design by Marco and Theodora Müller.

Pluckily, she grabs the mouse by the tail, pulls it out of the trap, and - with a great sweep - throws it out of the house. She inserts a new piece of cheese, and sets the trap in the living room. It would take days for her to catch all the mice.

She didn't know whether to enjoy the skill of the mice, or be annoyed by their cheek, when she opened the door of her small house by the sea and found the remains of their feast. Packets of coffee opened with their teeth; coffee beans on the floor and the kitchen shelf; bits of crayon on the carpet and beneath the table. The mice hadn't been fussy. Rather, they'd indulged in all the colours: the windsor green; the sienna, raw and burnt; the copper red; the Prussian blue; the cobalt yellow; the vine black; the ivory black; the reseda grey. They were expensive crayons, and she wasn't quite sure whether the mouse droppings were a little cobalt yellow, perhaps, or reseda grey, or windsor green. Quickly, she wiped up the dirt, threw the nibbled-at beans in the bin, collected the remaining crayons, and drove into the village to buy every trap in the shop.

She regrets wasting the cheese, but it's the only alternative to coffee and crayons, and the mice love it. She winces every time – ping – a trap snaps; the pace at which the mice are caught is rapid; she can barely keep up when it comes to grabbing them by the tail and sending them flying through the air, and out. When, one morning, she sends the latest mouse flying, a common buzzard sails up, without a sound almost, and observes her peculiar behaviour – delighted, surely, to have the mouse served right beneath him, and into his beak, like the roasted pigeons that, in Paradise, fly directly into your mouth. The buzzard clearly enjoys the mouse: barely has he demolished it, when he settles down on the gable, as close as possible to the source of food, hoping for more coffee-mice. That night, she hears his claws scratching on the tiles on the roof. The next morning, she serves the bird a second mouse. This continues for a week: she catches the mice and throws them to the buzzard, up he sails, catching them in flight. She likes how they are playfully modifying the laws of the food chain. Seven days and seven nights later - she's able to hear, as she half-dozes, the onlooker throughout - all the mice have been caught and eaten, and the buzzard sails off. - She misses him. She now considers breeding mice, and feeding them with coffee and wax crayons: with cobalt yellow, ivory black, and Prussian blue crayons.