The exhibition «aus und ein» (outbound and inbound) addresses a burning global issue in the form of a local case-study, a small-scale illustration of what happens on a massive scale the world over. It portrays migration as a completely normal phenomenon. Since the earliest of times, there have been regions with pull-factors attracting immigrants and those with push-factors that drive emigration. Over the centuries, migration has followed the same patterns and been triggered by the same motives. 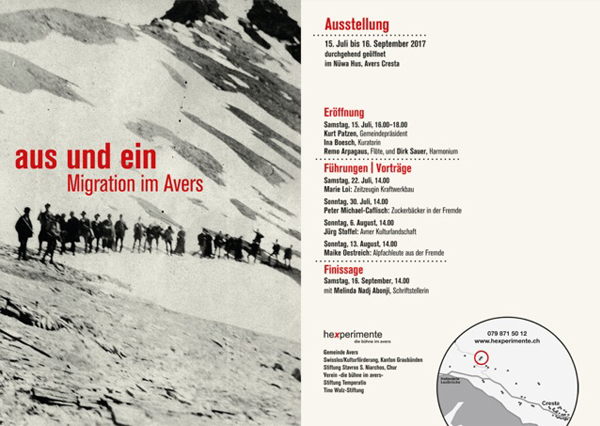 The exhibition by curator Ina Boesch and designer Remo Arpagaus displays eight stations spanning hundreds of years, including the immigration of the Walser people to the Avers region in the 13th century, overseas emigration from the valley in the 19th and the 20th century, and immigration from the EU in the 21st century. Exemplary life stories of migrants illustrate the issues involved. Those affected are also given a voice in videos and audio-visual slide shows, which feature, for instance, the widow of a construction worker from Sardinia, a mower from South Tyrol or an Alpine farmwoman from Germany. Photographs and objects from private archives help put such personal stories into the wider context of the Avers region’s history of migration.