hexperimente – a stage in avers
A unique cultural platform in the Alpine valley of Avers. Two highly charged topics – migration and witch-hunts – addressed by artistic means. 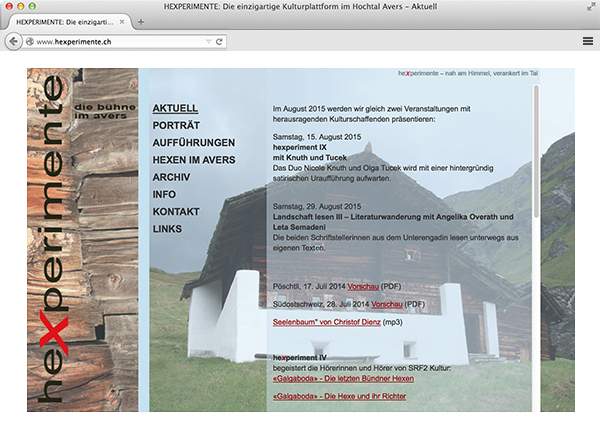 In 2009 Ina Boesch and musician and author Corinne Holtz set up a cultural platform called «hexperimente – die bühne im avers». The aim was to select historic material and then transform it by means of contemporary art. Up to 2016, the two curators commissioned one to two productions a year by reputed and distinctive cultural practitioners. Each one of the ten world premieres in all, staged in a converted farmhouse in the Alpine valley of Avers (canton of Grison), played to a full house. Some of the works were subsequently performed at renowned theatres, others were broadcast on radio, recorded on CD or published in book form.
hexperimente (an conflation of the German words for witch and experiments) is based on the records of Avers’ witch trials in the 17th century. In a first step, the records were transcribed and placed into the context of the Alpine valley’s history. In a second, topical elements were picked out and expressed in artistic form. The subject of witch-hunts also offered numerous starting points for socio-political debates.